Cue the lights, cue the music. The video starts. A young lady with Down Syndrome stands on a grassy football field, her eyes glistening with tears that threaten to roll down her carefully made-up face as she is crowned Homecoming Queen to a chorus of thunderous applause. The next few minutes of the video are clips of the girl’s nondisabled classmates describing how they all decided that they would nominate and vote for her so she could “feel good about herself,” and how “brave” they think she is while teachers and parents nod approvingly, beaming with pride and happiness.

You scroll through your social media feed. It’s another viral post about an autistic child who got hordes of birthday cards from well-meaning strangers because he doesn’t have any friends and his mother wanted him to feel like people care about him.

You’re walking out of your home. One of your neighbors is passing by and greets you. As you lock your door, you return their greeting. Your neighbor stops to make small talk and you compliment the sweater that they have on. “Thank you,” the neighbor says, “but isn’t is strange that it’s cold enough that I even need a sweater today? Yesterday I was wearing shorts. This weather is soooo bipolar.”

Your Netflix app sends out one of its periodic notifications. This one is a discount coupon coupled with recommendations for a few movies you might want to watch. One of those movies is “Me Before You,” a 2016 movie in which a man seeks to end his life as a result of becoming disabled and no longer being able to walk. It earned over $207 million worldwide (10 times its studio budget) and earned a People’s Choice Award for “Favorite Movie.”

You flip through the local paper. In the human interest section way in the back near the classified listings there are several public notices. One or more of them announce an intent to “terminate parental rights” of various individuals. What it doesn’t say is that those individuals, the parents who are losing custody rights to their children, are disabled. Nor does it reference the staggeringly high child removal rate disabled parents face, reportedly as high as 80% in some cases.

You’re at the playground. Other than the obligatory accessible parking spots, you don’t observe any efforts made to make the environment accessible. The ramps dead end at a sidewalk and don’t lead up to the swing set, slides, monkey bars, merry go round, or jungle gym/climbing area. The swings are the old kind, flat and horizontal, with no back support. The playground surface is uneven and covered with slippery pebbles. The merry go round is adorned with lights that flash on and off while it spins.


You’re watching the news. There is a financial analyst discussing how a certain policy will “cripple the economy.” Another panelist comments on saving habits of millennials, remarking that they are “too blinded by instant gratification” to save money at the same rate of previous generations. A third panelist retorts that the only reason Baby Boomers saved is due to being raised by parents who were still “paralyzed by fear at the horrors they survived during the Great Depression,” not because they were inherently more responsible than millennials.

This is but a tiny sample of the world we live in. It is a world designed by and for non-disabled individuals; a world where accessibility is perceived as extraneous, bothersome, costly, and usually an afterthought. It is a world where numerous individuals with disabilities STILL lack basic rights, autonomy, and access. It is a world that is better than it was, but still is extremely, unquestionably, excessively ableist.

Ableism is defined as discrimination/prejudice against individuals with disabilities. And it’s EVERYWHERE. It permeates practically every aspect of society from the individual level on up. Like the air we breathe, it isn’t easily apparent, but it is a constant presence. It impacts systems and structures as well as people. And it does not only impact disabled people; it impacts you too. You were raised in, and still live in, an ableist society; more likely than not you harbor some ableist views.

Most people don’t think they’re ableist - if they even know what “ableism” means. However, once they have an understanding of the term, most people bristle at the thought they could harbor any sense of bias against disability, and would go to great lengths to try to prove that. However, some things are just a fact of life. I’m writing to you today as a disabled woman asking you to lean in with me; to consider my words; to feel me. To try to.

I could back up and try to illustrate this a different way. What if I were referring to the concept of racism instead...including white privilege, white fragility, microaggressions, anti-blackness, anti-immigrant sentiments, and other terms that many of you are more comfortable with? Most of you possess or are developing a sense of consciousness about this issue and have grown in your capacity to better comprehend and better address these and other complex racial issues.
Or what if I was talking about homophobia, transphobia, Islamophobia, misogyny, classism? None of us doubt those things exist, and none of us would argue that we haven’t been affected in some manner by the greater societal view of them - whether we accepted it, rejected it, struggled to understand it, or whatever reaction. Ableism should be no different.


Here are a few ways that you can do that:


Those things will be a good start and will help you become a lot less ableist. But as this is a #calltoaction post, there is also some urgent civic action that you can help with, right now, with regard to disability:


1. Contact your lawmakers to OPPOSE H.R. 620, the ADA "Education and Reform Act," which would make it harder for people with disabilities to enforce their right to access public accommodations. You can sign a Change.org petition that was created for this purpose: https://www.change.org/p/dara-baldwin-don-t-tread-on-my-ada-oppose-ada-education-reform-act-of-2017-h-r-620


2. Contact your lawmakers to OPPOSE H.R. 1493: “To amend the Americans with Disabilities Act of 1990 to impose notice and a compliance opportunity to be provided before commencement of a private civil action.” This puts the onus on disabled people to have to formally notify entities who have violated their rights that further action will be taken.


3. Contact your lawmakers to OPPOSE H.R. 634, which would dismantle the entity that is supposed to make voting more accessible.


4. Contact your lawmakers to SUPPORT HR 897, which would fund peer-run programs by and for veterans seeking mental health support

Many thanks to the members of the Disabilty Intersectionality Group who assisted me in coming up with several of these ideas for things you can do to combat ableism. 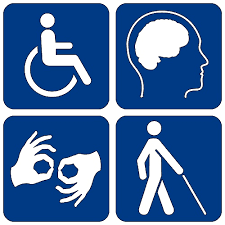