Lessons from Imperial China, for Disability Day of Mourning (#DDoM)

"Would you bind my feet?"

I was on my laptop in my living room entering grades into my online gradebook. Basically working from home for free (as usual...that's #teacherlife for you, right?) on a warm weekday afternoon. The kids were afoot as they always were: my youngest daughter snuggled against my back as we sat on the couch; my teen queen in her usual spot on the floor completing her homework; my oldest son at the kitchen table nearby eating his second (or third...or fourth) after school snack; my middle and youngest sons laughing and chasing one another around the house. It was an ordinary afternoon. Or at least it was until my youngest daughter asked that.

"Would you bind my feet..." I repeated. (I'm autistic, so I sometimes need to use echolalia [repeating what has been said] to process things.)  "What do you mean?"

I didn't really know what to say in response. She's seven; how on earth did she know about foot binding?

"How on earth do you know about foot-binding?" I asked.

"I read about it in a book," she replied. "And saw pictures too."

"What did you read exactly?"

"That mothers would bind their daughters' feet when they were little girls so their feet would stay small. They would wrap the feet really tightly and it hurt a lot. When they grew up they couldn't walk very fast."

I sighed. "What you read was true," I said. "It has been against the law in China for a very long time. But people used to break their daughter's bones so they could bind their feet. They would force four of the girls' toes underneath each foot to make a pointy shape like a lotus."

"What's a lotus?" she inquired, still against my back.

"It's a flower with pointy petals," I answered. "Do you want to see some pictures of lotuses?"

"Yes!" She crawled around to my lap and sat. I opened a new browser and did an image search. We scrolled through several pictures of lotus flowers.

"May I see more pictures of foot binding?" she inquired. "The pictures in the book were small."

I hesitated. Would she be able to handle the images? They were kind of graphic. I thought over it awhile and decided to try. If it was too much for her we would stop.

I explained to her what she was about to see and gave a few more details about the process of foot binding. She didn't flinch. I let her know that if the pictures were difficult to look at we could stop. She answered me with her eyes. I typed in the words and started our search.

We looked silently at the images. Some of them were pictures of feet only. Others were full body pictures of Chinese women, most of whom were very elderly, revealing their feet. There were also x-rays comparing feet that were bound and feet that weren't to depict the damage. We saw diagrams and plaster molds of bound feet too.

Her bright eyes took everything in. Then she looked over at me sadly. "Would it make those moms sad that their daughters were crying?" she stated softly. "Wouldn't they feel bad that they were hurting them and that they were messing their kids' feet up forever?"

I could sense her pain as strongly as if it were a fragrance emanating from her body. I closed the computer screen and embraced her. This didn't make sense to her, and as an autistic child, my daughter needed things to make sense. A world where mothers inflicted pain on their own children was a world that she did not understand.

All I could give her was the truth. "I'm pretty sure it did hurt the mothers very much," I said. "But they probably felt that the pain was worth it. They thought that if they didn't bind their daughters' feet no one would accept them and they would never get married. No man would want a woman whose feet weren't bound."

"How did they know that?" Her brow was furrowed as she glanced sideways at me.

"How did who know what?"

"How did they know no man would accept them? Maybe somebody would love a girl a lot with her regular feet. Because she could run and dance and play and go places with him. The girls with foot binding couldn't do that because it would hurt too much."

"Yes," I replied. "But most men would be embarrassed about how her feet looked since everybody else's wives had bound feet. So it probably wouldn't happen."

I stopped, deep in thought. The whole conversation reminded me of autism. And of parents. I thought about the countless articles, blog posts, forum messages, etc that I'd read where parents described some of the therapies and/or interventions that they were using with their children. Many of them shared in detail about how distressed their children were. About how the children cried and resisted the therapies. It was clear that the parents grieved the discomfort their children felt. But...they still persisted with the therapies, convincing themselves that there was no other choice.

They believed strongly that their child "had" to have therapy to help them "fight autism" and learn better "social and communication skills" almost by any means necessary. If that meant 40 or more hours per week of therapy, costly "special needs" private education, restrictive elimination diets, draining the family's life savings to pay for various services, embracing conspiracy theories in an attempt to explain/cure autism, supporting questionable biomed "treatments" - whatever. Apparently the ends justified the means and the child would one day be better for it.

Doing all of this would transform the child into something totally different than who they truly were.

Just like foot-binding transformed a foot into a "perfect three inch lotus."

I felt almost physically sick as I realized the similarities between foot-binding and the way people view and handle autistic people. We are not considered to be acceptable as we are; the only way we can be seen as worthy is if we are radically changed into something very different than who we are. And everyone - autism parents, "professionals" from various disciplines and fields, autism "charity" organizations, and society at large - is in on it. Everyone truly believes this is the best way to "help" us.

It was like that in ancient China as well. Mothers and male suitors weren't the only people in favor of foot binding. It was a fully integrated aspect of society at that time. Home design changed to accommodate foot binding, as women were no longer able to climb up and down stairs. Alleys and walkways became narrower because women needed to stop repeatedly and lean against buildings when they were out because walking was so cumbersome. Fashion also changed as a result of foot binding as soft, pointy shoe styles emerged that emphasized the small, triangular shape of women's bound feet. As a whole, women were forced to remain primarily at home rather than venturing out very much because it was too physically taxing to do go many places.

In hindsight, we look back at the practice of foot binding and recognize how problematic it was. How negatively it impacted women and how discriminatory it was. But as it flourished for centuries before it was banned, I'm certain that the few people who criticized it at the time were viewed as irrational naysayers. It's likely that none of those "naysayers" lived to learn that one day people would come to realize that they were actually right.

I don't know the answer to any of these things.

I do know that some girls didn't survive foot binding. They developed gangrene and died in excruciating pain; dead often at the hands of those who are supposed to love them the most.

There are disabled people who don't survive society's modern foot binding either. People who lose their lives due to harmful treatments such as "rebirthing" and other "attachment therapy" practices; people who are poisoned by commercial grade bleach and other snake-oil "treatments" designed to "cure" autism; people who are neglected and/or abused by their caregivers for the crime of being disabled. 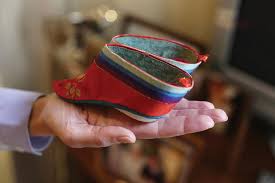 Every year in March the disability community celebrates a Day of Mourning to remember the lives of individuals with disabilities who have been murdered by their caretakers. Each year the list grows longer and longer. It contains individuals as young as Maxwell Eyers, beaten to death by his father at 2 years old,
and individuals as old as Emily Molin, the 85 year old whose son ran over her with a car.

It contains every age, gender, race, and socioeconomic category you can imagine. It is an equal opportunity list of violence, ableism, loss, and sorrow.

It is a list that should not even exist, much less increase in size each year.

It shouldn't take centuries for us to realize that what we are doing is not just hurtful; it's severely wrong.

I dedicate this post to those whom we will mourn of the Disability Day of Mourning next week (#DDoM2016). Each name represents a life that should not have been lost; collateral damage of society's ableism and failure to value that all life - even a disabled life - has value.

They say that those who do not learn from the mistakes of history are doomed to repeat them.

When will we learn? 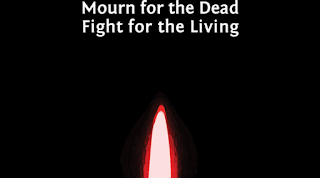