Out of the mouths of babes! :)

As you can probably tell, I'm not a very frequent blogger.  I blogged a whopping two times here in 2013.  I like blogging, but for some reason forget to do it much.  (I'd blame it on the ADHD and the six kids, but there are some very active bloggers who have twice as many kids as I do and who are also neurodiverse, so I can only blame myself, lol.

However, thanks to my awesome tween daughter's suggestion that I "cut and paste" some of my Facebook updates as blog posts, I might actually be able to keep this blog up.  Plus, I've already blogged more than twice during the year 2014 (probably thrice?), so I'm already ahead of the game, yay me!  To anyone who knows me on FB, I'll tag those posts so you can skip them if you want because you may have seen it before.  (Or you can read it; sometimes things are worth checking out more than once.)

Soooooo...here's a cute exchange I had in January with my youngest daughter.

Daughter (age 5): Mommy, I don't like the music you listen to. It's not good.
Me (who mostly listens to Christian contemporary and smooth jazz): I'm confused, honey. Why isn't is good?
Daughter: They talk about doing bad things in that one song.
Me: What do you mean? What bad things?
Daughter: That man keeps saying he wants to "live with a panda." That's not good. Pandas might be cute, but they are very dangerous animals.

Me: In what song does somebody say something ridiculous like that?

Daughter: (sings a bit of song)

Me: Oh! He's not talking about living a panda! He's saying "live with abandon!" (Song by the Newsboys). 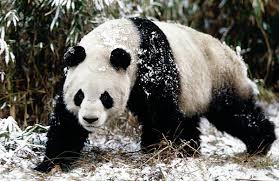