The deadly disease I'd never heard of

I’d never heard of Kawasaki Disease in my life before my son had it, but thanks to the American Heart Association, CDC, Mayo Clinic, and other sources (whose information is summarized below in addition to my personal narrative), I came to learn a lot about this condition while frantically researching from my cell phone in the doctor’s office, ER, and my son’s hospital room.

Kawasaki Disease (also known as “mucocutaneous lymph node syndrome”) is an acute systemic vasculitis (inflammation of the blood vessels) that occurs in childhood and is the leading acquired cause of pediatric heart disease.  Kawasaki affects approximately 4500 American children annually, usually in the winter or spring.  Kawasaki symptms develop over the course of 1-2 weeks, and the entire onset of the illness typically lasts 6-8 weeks, though for some unlucky children the effects last for a lifetime.

Although anyone can contract Kawasaki, children of Japanese heritage are most susceptible of Kawasaki (more than three-fold more likely even than other children with other Asian heritage and significantly more frequently than children of other races).  It occurs most often in young children (under five years old), particularly boys; the average age of diagnosis is age two.  Fortunately, it is often self-limiting (meaning that it will progress and then resolve on its own over time without treatment); however, its symptomology still creates problems – resulting in aneurysms in 15-25% of children and risk of sudden death especially if not properly diagnosed and treated within its first 10 days.

Visible Kawasaki Disease symptoms (of which my son had every single one) include very high fevers (in my son’s case, sudden fever over 105 degrees Fahrenheit for nearly TEN days in a row NOT significantly lessened nor controlled by medication); excessively cracked, garishly bright red bleeding lips and bright red swollen tongue such as one might see in scarlet fever; two reddened eyes like in pinkeye but without the drainage; peeling and cracked skin of the fingers, palms, toes, soles of feet, and genital region (and I mean peeling and sloughing off skin like a snake sheds its skin, not just typical dryness); dark lines appearing on the finger and toenails, followed by the nails thickening, clubbing, and splitting; spotting, discoloration, and rash on the body; huge, swollen lymph nodes, etc.

The unseen toll of Kawasaki, however, is far more concerning that what is visible to the naked eye.  The inflammation of coronary vessels result in several tell-tale cardiac findings, of which my son had four.  Several echocardiograms are given (initially and at various to assess the extent of heart damage and to determine if more aggressive treatment and/or surgical intervention might be warranted.  Kawasaki often causes severe joint pain (as it did to my son) and in some cases arthritis.  There are also changes detected in the blood.  My son’s lab testing revealed abnormalities; specifically an extremely elevated leukocyte (white blood cell) count, anemia, high thrombocyte (platelet) count and low bilirubin.  His tests also showed something called a high erthryocyte (red blood cell) sedimentation rate and a high C-reactive protein (a protein released by the liver) rate, which meant that his red blood cells were breaking down faster than they should and the protein was being released in larger and faster quantities than it should, signaling an infection.

Kawasaki can often be successfully treated within the first ten days of onset by 1-2 bouts of immunoglobulin (given through an IV over several hours, 12 hours if I recall correctly for my son) and then daily low-dose aspirin to prevent further heart damage.  If caught in this optimal window of time, the chances of the disease progressing to long-term damage drops to under 4%!  And the treatment is often so successfully that though the symptoms don’t disappear overnight, they often begin to rapidly improve in an astonishing amount of time with noticeable changes within as little as one day.

However, misdiagnosis of Kawasaki is common, which can delay the start of treatment and increase the risk of heart problems and death.  It can sometimes be difficult to determine whether a child is presenting with Kawasaki or with some other illness; however, there is a protocol that physicians should but often don’t utilize to rule out other symptoms.  My son was repeatedly misdiagnosed (due largely, unfortunately, I suspect, to race – but that’s another sad story), and thus did NOT get treatment as early as he should have; he could have been treated within the first few days as I made repeated trips to the doctor, urgent care, and ER in the initial days of his high fever.  He was even hospitalized for some days due to the fever yet still not properly diagnosed at the time despite telltale labs and other symptoms.  But thank God, our pediatrician insisted upon his discharge from the first hospital that we immediately take him to the ER of another.  He was assessed, admitted, properly diagnosed, finally, and treated. He survived.

On the day he left the hospital, I sent the following message to the many loved ones who’d kept him in their thoughts and prayers throughout the ordeal: “To God be all the glory.  Lukas successfully completed his IVIG treatment and his most recent echocardiogram does not indicate heart failure.  Though he will still have to take aspirin as prophylaxis against future heart problems and will have numerous follow-ups with cardiology and infectious disease, he has recovered tremendously – enough to be discharged from the hospital this evening.  I’m writing this testimony to you sitting on my living room couch!  Thank you all for your prayers and your support; it meant a lot to us. J 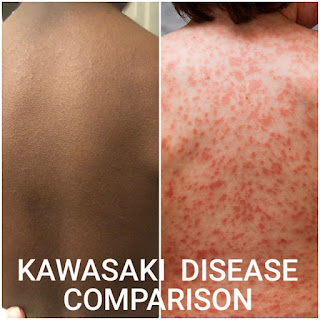