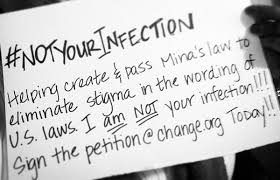 (This post was originally published on the Advocacy Without Borders blog here.)

"The inspiration behind thi's post is an amazing 12 year old girl we call Mina.  Mina is a sweet, kind, and awesome kid who brings joy to her family, friends, and all who know her. She is thoughtful, deeply compassionate, and full of life. She has survived many hardships, so she is mature beyond her years...yet in many ways she's very much still a young girl.

Although Mina adores Korean food, since she was originally born in Africa, she will devour a plate of sweet plantains so fast it would make your head spin! And speaking of spinning, she is as likely to spontaneously cartwheel across a room as she is to sit down and initiate a philosophical discussion with her parents or teachers. She loves K-pop, science, chocolate, dancing, peace signs, silly Vine videos, and hanging out with her friends. A born leader, she has earned herself the unofficial occasional nickname of "Bossy Big Sis."

Overall, Mina is just an all-around great kid. She works hard in school and helps a lot around her home. She's not much different than most tween girls you'd meet with one small exception.

(Though Mina's family usually chooses to identify as an HIV affected family rather than disclosing the serostatus of specific family members, Mina felt that it was important in this case to share more information than what is typically within her comfort level.)

Mina adheres strictly to an effective medication regimen of highly active anti-retroviral treatment (HAART) to keep her healthy. By taking a pill once per day, she keeps the virus at bay. For several years, the level of HIV in her blood has measured so low that it cannot be detected in her quarterly lab screenings (her HIV level is "undetectable"), and her immune system has also improved. Though she experiences some health complications as a result of a lifetime of HIV, including a previous AIDS diagnosis, she is in good virologic health. 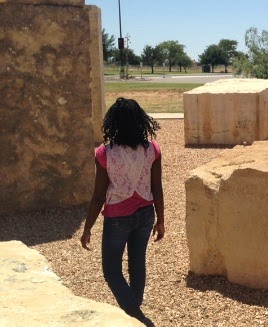 Her situation is not atypical; a great deal has changed since most of us became aware of the condition that we now call the human immunodeficiency virus, or HIV, over three decades ago. And much of that change is good. We are no longer living in a time where fear and hysteria surrounding HIV are commonplace. The '80's, thank goodness, are far behind us.

Today, we have a clear understanding of how HIV is and is NOT transmitted. Scientists have discovered intricate details about the way the retrovirus operates. Perinatal HIV transmission has been drastically reduced. Research findings and technological advances in HIV diagnostics, treatment and prevention have radically transformed HIV from a "death sentence" to a manageable chronic illness such as diabetes or other conditions.

People living with HIV (PLHIV) now have a life expectancy and quality similar to that of individuals without HIV; with the potential for lengthy and fulfilling lives that include careers, spouses, children, and/or other aspirations. Moreover, we are closer to a cure or functional cure than ever before. But with or without a cure, a growing number of PLHIV are living their lives fully and out loud right here, right now. It is estimated that over thirty-five million people around the globe are HIV+, and many of those people are committed to eradicating the stigma that is unfortunately still attached to HIV today.

I too am tired of stigma. Really freaking tired. So it is my hope to do my part in trying to eradicate stigma by launching Mina's Law: the #NotYourInfection Campaign on World AIDS Day 2014, inspired by this precious young lady living her life courageously and fully with HIV.  I will explain the rationale for the campaign throughout the remainder of this post.

I have grown increasingly disturbed over the years how frequently and callously the word "infected" is thrown around with regard to HIV. Whether it's legal documents in all fifty states and US territories, textbooks, research protocols, media references, literature, conversation, or something else, you can hardly go a day without being slapped in the face with the word "infected."

"I will never forget when I found out that I was infected..."
"The number of HIV infections has risen..."
"This is a support group for behaviorally or perinatally infected teens..."
"We need to increase funding to expand our prevention efforts to curb the number of infections..."

It goes on and on. It has been bothering me for years, to the point where I have had to train myself not to visibly flinch or cringe. Yes, I know HIV is technically contracted via a person becoming "infected" with the virus.  I'm not in denial that it is a virus or that there is an infection that occurs. I get it. It's an infection. But you know what? So is the measles. So is strep throat. So is meningitis. So is the flu. So is malaria, hepatitis, RSV, cellulitis, H. pylori, staph (MRSA), shingles, appendicitis, and a host of other things. They are also "infections," yet they are described quite differently. They are described in a far more respectful manner.

Society pays lip service to HIV acceptance, stating (truthfully) that there is no fundamental difference between being HIV positive and HIV negative. That there is no shame in the diagnosis and no reason to be perceived as less than anyone else who does not have HIV. We participate in AIDS walks, attend HIV related events in our communities, attend national HIV conferences. We publicly condemn HIV stigma.

However, the way we speak about and write about HIV and those living with HIV conveys a much different message than the one of acceptance society claims to hold. The way something is referred to is a huge indication of how it is truly viewed. The presence of "infected" in sentence after sentence, every single day in millions of interactions and important documents strongly negates the politically correct message that "it doesn't matter" whether or not you have HIV.  It asserts that despite the gilded veneer of acceptance, it actually DOES matter. You're not merely HIV positive; you're HIV INFECTED.

Just think about it for a moment. Would YOU want to be referred to as "infected?" That term doesn't exactly conjure up pleasant images in my mind when I hear it. It makes me think of illness. It makes me think of something bad, something undesirable, like a wound oozing with pus. It certainly doesn't cause me to picture Mina's joyful, radiant smile.

I reject that. And so does Mina and the rest of the HIV community. It is best expressed in this quote shared this summer by an adult living with HIV:

"I may be HIV positive, but I am NOT your d@#n infection. And neither is anyone else living with HIV!"

I'm not alone in this sentiment nor did I conceive of this idea alone. There are so many groups that I admire and respect who are also deeply concerned about this stigmatizing language. A number of groups, including the Positive Women's Network-USA, the Global Community Advisory Board of the AIDS Clinical Trials Group, and others, have provided great leadership and advocacy on this topic. The revered "Denver Principles" are obviously influential as well. This campaign has arisen out of a need that many PLHIV and allies have identified, not just me.

And this campaign needs more than just my emotions; it needs YOU!  I implore any and all individuals and organizations out there to help make this campaign work. It will take a lot more manpower, activism, legal expertise, and media than an ordinary individual like me has to make these changes. I CANNOT do this alone; I need YOUR help.

On World AIDS Day 2014, and beyond, I'm asking you to consider doing the following things:

If stigmatizing language is part of your vocabulary, put an end to it now. Change how you refer to people living with HIV and to HIV as a whole. The Stigma Project has some helpful resources about how to change your "HIV Talk;" check them out here.

If you are comfortable, take a selfie to help end stigma! Snap a pic of yourself holding a sign with the hashtag #NotYourInfection and to blast it all over social media to help get the word out! It doesn't matter if you are HIV negative or HIV positive; you can still help us to raise awareness! 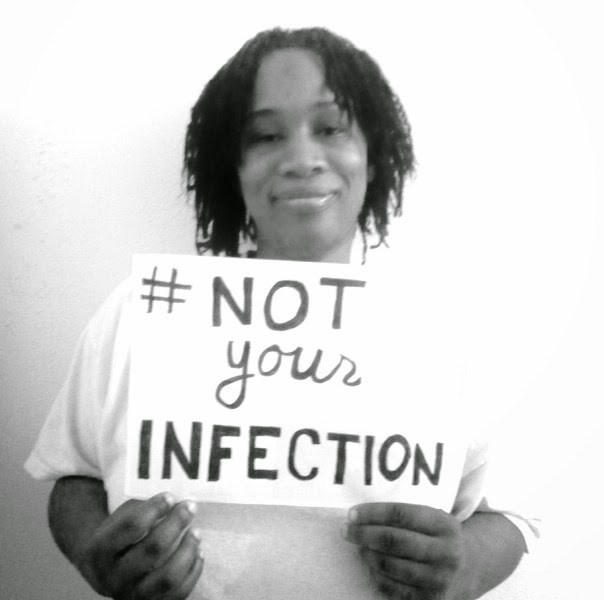 We would LOVE for you to sign and widely share our Change.org petition. Every time it is signed a copy of the petition and comments is emailed directly to the members of Congress and to the President of the United States.

Utilize the power of social media! Use the #NotYourInfection hashtage widely. Blog/Tweet/whatever about this topic! Consider "liking" our #NotYourInfection FB page and following us on Twitter to keep abreast of updates.

Another important thing that you can do is to support this cause! Commit to legislative, media, and community action and outreach surrounding this issue in your area. Contact your state's Congress and Senate representatives. Urge them to consider authoring a bill to make Mina's Law a reality. Do the same thing at the state and local levels too for maximum impact. Attending the annual AIDS Watch event is a GREAT opportunity to engage in legislative outreach, but there are other ways too!

It is my hope that as this campaign grows that the many dedicated organizations within the global HIV activism community will take this campaign to new heights with their leadership, sharing existing resources and creating additional ones (such as toolkits containing sample letters and other useful advocacy tools) that supporters can use to advocate for this cause. I look to you all to help and wisdom!

Thank you all for your support and help showing the world that PLHIV are #NotYourInfection!!!" 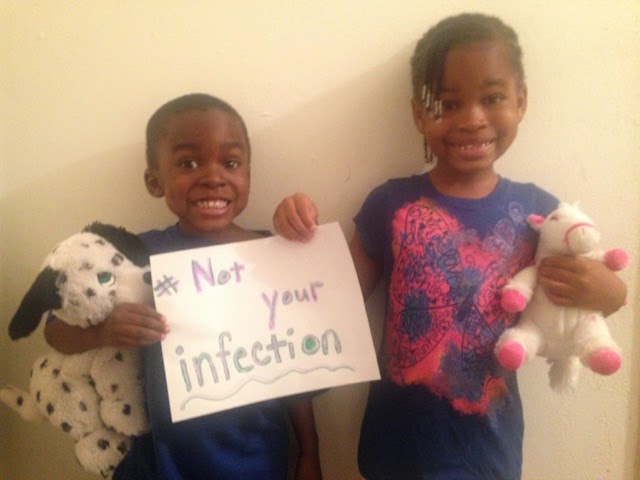