Face the truth: what you REALLY mean when you say "low-functioning"

There are several GREAT blog posts about functioning levels written by adult Autistics and by parent allies that discuss functioning labels far more eloquently than I, and I encourage you to read them. This post is merely my small contribution on the subject.

And it's going to get real up in here. Let's stop already with the deceptive semantics and just deal with the truth: there IS no "low," "moderate," or "high" functioning autism. There just isn't.  Just as there is no Tooth Fairy.  Just as parents placing money under their children's pillows doesn't magically make those parents transform into the Tooth Fairy, millions of parents and professionals using functioning labels doesn't make those labels legitimate nor accurate.

Technically, there is not and never has been an actual diagnosis called
"low-functioning autism" or "high-functioning autism."  There is and has never been an ICD code for either of those or for anything like them.

Three of these once separate diagnoses have been merged since 2013 under the DSM 5, so there is now an ICD-10 code for a singular diagnosis, Autism Spectrum Disorder.  Again, there is not and has never been anything other than these autism categories. Period.

"But my doctor said Timmy had low-functioning autism!" you cry.  Yes, your doctor very well might have said that. That term, and similar ones have been tossed around for many years, but they're not an actual diagnosis.  They are colloquial terms that doctors, parents, and other professionals use for descriptive purposes similar to how some people in the African American community might be described by their complexion.

Just as the use of functioning levels is just as variable and inaccurate as that is; what's considered "light" or "dark" to one person is not necessarily the same way another person would characterize it.  And just as there's no actual race called "high yellow" or "dark-skinned," there's no "low-functioning" or "high-functioning" autism.

In discussions about treatment, about services, and about "cure," the false dichotomy between the "levels" of autism is ever-present.

The "high-functioning" people are supposedly "draining resources" needed for others - that's IF they're even accepted as truly being autistic and not just "quirky." (Because of course they're "too high-functioning" to understand "what it's REALLY like" to be on the spectrum.

And the "low-functioning" people are "suffering" and their families are supposedly "desperate" for "any" treatment that will help - be it compliance training, questionable biomed, or even the ever-elusive "cure" of the month being peddled by autism's many snake-oil salesmen.

NO, I don't think everyone on the spectrum is the same.  YES, people present differently. That's why it's considered a "spectrum."  There is a phrase that some people use pretty frequently that describes this well: "If you've met one person with autism...you've met one person with autism."  Although in recent years that phrase has unfortunately been used unkindly by some autism parents as a dismissive tactic to silence adult Autistics who are "not like my child," I think the phrase's original intent before it was twisted by others was to acknowledge the heterogeneity of the autism spectrum.

At any rate, if people are honest with themselves, all "low-functioning" really means is someone who is both autistic AND has a lower score on IQ and/or adaptive living skills assessments.  (Additionally, to some it likely also means an autistic person who is primarily nonspeaking.) In other words, "low-functioning" is the presence of an autism diagnosis and intellectual disability (and again, to some, also the characteristic of being a nonspeaking individual).  These are the ONLY differences between those who are "low-functioning" and those who are high-functioning." Nothing else.

This particular post was prompted by something I read this morning in a group.  For the umpteenth time, someone said that we "shouldn't judge" someone who wants a cure for their "low-functioning" child who was "suffering."

Don't get me wrong. I KNOW that co-occurring conditions such as epilepsy, depression, etc can exist. I am an autistic adult and I have co-occurring conditions.  So do my autistic kids. I begrudge NO ONE the right to address problematic symptoms of any type with the appropriate treatment. I am not anti- treatment; like most neurodiversity proponents, I think ethical, helpful treatments are of tremendous importance.  That's not the issue.

But no one will EVER say that explicitly because it's not "politically correct" to say that they want a "cure" for intellectual disability. It would be considered discriminatory and disrespectful (as it should).   So even though that is what is MEANT, that is not what is actually said.

Unfortunately, no such "political correctness" exists for autism. With regard to autism, expressing a desire for a cure IS socially acceptable as well as common.  It is not at all unusual to hear autism parents, autism professionals, and even well-known "charitable" autism organizations frequently and openly lamenting about how difficult "dealing with autism" is; how much autism "costs; "how much those on the spectrum are "suffering" and how their families are as well; and how finding the cause and a cure is needed.

Then to illustrate the point, EVERY single symptom, characteristic, and/or behavior a person has then gets lumped under the category of "autism" even when few of the challenges the parents are concerned most about fall under the diagnostic criteria at all.

According to the DSM 5, autism (Autism Spectrum Disorder) is characterized by:

"Persistent deficits in social communication and social interaction across multiple contexts..." and
"Restricted, repetitive patterns of behavior, interests, or activities, currently or by history..."

That is IT.  Period.

It's not epilepsy.  It's not gastro-intestinal distress.  It's not allergies, or anything else.  Though it can exist alongside those things.

And it can (but does not necessarily have to) exist along with intellectual disability.

With regard to intellectual disability, there are many people with it who have careers, spouses, and families.  They have hobbies, interests, goals, talents and friendships.  They add to the diversity of our shared humanity.

And you know what? They should still exist. They are still human.  They still have value.  Period.

One of my children (who is non-autistic) has intellectual disability.

He should exist.
He is human.
He has value.  TONS of it, actually.  He is amazing.

I know *exactly* what you are talking about when you begrudge the existence of individuals who are "low-functioning" and that you want to "learn the causes" so you can "prevent" people from being born who are going to be "like that."

But then you go on to describe something very much unlike autism, but very much like my child and other people who share his diagnosis of intellectual disability. The people you describe almost as if they are less than human because they are different than you.

That I have a huge, huge freaking problem with.

Stop basing the value of people's lives on minuscule things such as whether or not they speak, how "social" you think they are, their perceived intellect, or other characteristics.

Start looking at what REALLY matters about a person. Their heart. Their character.  Who they truly are in totality. Focus on their strengths. Offer support. Offer love. Build them up.

For God's sake.  For your own sakes. For the sake of the youth, who are our future. 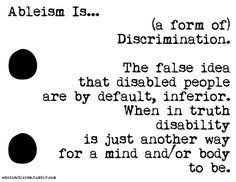